In order to move water vapor becomes water evaporates, the water vapor pressure difference is required between the air and the convection layer and the surface of the material.

Water vapor of the material surface so that the saturated pressure is the saturated water vapor pressure.
Pressure in the convection zone is proportional to the humidity.

The difference of density is born into the Gas boundary membrane, and water vapor will move in accordance with the gradient of the density. 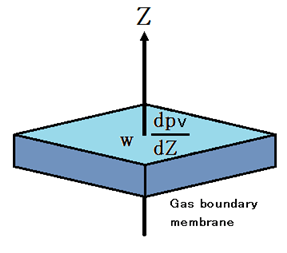 (-) Sign, means that the water vapor moves in the direction in the density decreases.

The formula of the vapor diffusion coefficient D

The diffusion coefficient of water vapor in standard atmospheric pressure is 0.220 cm [/s ]2 (0℃).

If this formula treats the air containing vapor as ideal gas, since the density of vapor is proportional to water vapor pressure, it can also use a vapor slope instead of a density gradient.

DMv / RT is also known as the diffusion coefficient corresponding to the water vapor gradient.

3-5.Balance of the process

4-1.The air and the nitrogen