Wavelength distribution of the solar wavelength region with a view of the human eye and visible range matches almost its peak.
Not coincidentally, the result it want to obtain information humans using the sunlight, it has survived the weapon it, that this is the product of biological evolution.

It did not use the ultraviolet or infrared region,
The match the focus of the lens (lens) over a broad wavelength range can be difficult.
Selection of the material of the eye that can be used in a wide wavelength range is difficult.
Become large and heavy when you attempted this, you will be considered because it was detrimental to the survival contrary.

It will take place in the future trial and error like this also would have been carried out in the course of evolution.
Does not necessarily coincide with the visible range of human beings in other organisms.
It will be considered more of a short length is also advantageous in the eyes of the ultra-small.
It can see ultraviolet region up to (UV) sensitivity of the eyes of insects are shifted to the short wavelength side. 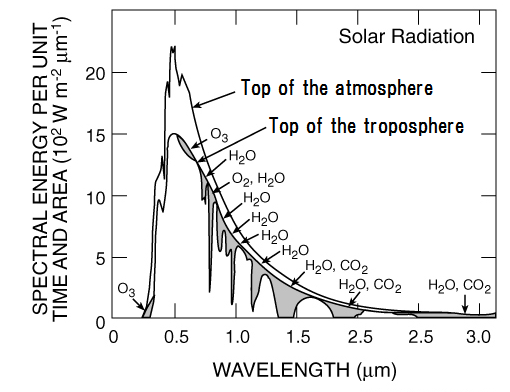 As it can see from the figure above, far infrared rays are not included in most of the sunlight.
Heating effect of sunlight is due to near-infrared light – in the visible range.
Light energy that is absorbed → There are heating action is changed to heat almost all regardless of the wavelength of course also visible light.

However, in the case of short wavelength light such as blue light-ultraviolet light, and changes to the energy 100% heat because it may be such as is accumulated absorbed light energy is changed into chemical energy in a photochemical reaction photon energy is large I can not say until.
Since it is not a big mistake, even if I thought it so very small amount on a percentage basis even, to be converted into heat all.
Photochemical reaction does not occur at all photon energy is small in the infrared region, 100% fully, into heat.

On that does not include most of the original sunlight, because it is absorbed by such as moisture in the air, far infrared rays are not included in most of the direct light from the sun.
And it to absorb moisture in the air also means that the radiation, far infrared rays of long wavelength from the atmosphere and clouds will pours on the ground in large quantities.
It will be nearly twice the energy of the direct light from the sun can be seen from the figure above are rained down on the ground in the form of far-infrared radiation from the atmosphere and clouds.

And a lot of energy has been emitted in the far infrared 10μm near further skyward from the ground.

It dose not have to feel “warm” this, but temperature differences is as large as without it, the shade will be that it is cold and chilly night.
I will approach the (-273 ℃) absolute zero these If zero.

No.12 UV surface modification of the resin printed board

No.3 Test of photocatalyst