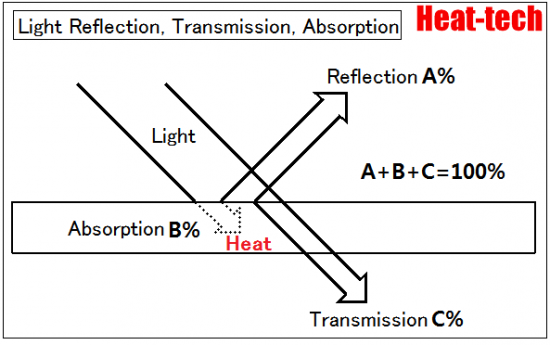 Light incident on the object shown in the figure above is partially reflected, some is absorbed, some is transmitted.

Ratio of the reflected light if the A%, reflectance of the object will be A%. Absorption rate of B%, transmittance is C% as well.

This is the law of conservation of energy.
Even if energy changes a form , the quantity of energy also does not increasing and does not decrease.

The emissivity is the fixed quantity of radiation phenomena.
When it becomes to a temperature at which there is an object, energy is emitted in the form of (mainly microwave-infrared to visible light region) light from there, emissivity is a number of this radiation degree.

The black body is an idealized physical body that absorbs all incident electromagnetic radiation, regardless of frequency or angle of incidence.

It is easy to radiation as same as easy to absorption.
If the absorption rate is zero, the object can not heat dissipation by radiation.
The important point is always “absorption rate = emissivity rate”.
This is the Kirchhoff’s law (radiant energy).

Characteristics and varies with temperature even in the same glass radiation of the glass (= absorption) characteristics.
Silica glass is transparent to the visible light region at room temperature, but is close to being opaque becomes (1200 ℃) softening temperature, I will be as glowing yellow.
Quartz glass does not light remains zero even visible light emissivity because it is still clear at 1200 ℃.
However, because it is opaque in the infrared region, and infrared radiation.
Absorptivity (= emissivity) is going to become higher in the visible light range from around 1700 ℃ also quartz glass, I will begin to light in bright white light.
I estimated temperature because I feel washed out than (6000K) sunlight But 2000 ℃, the emissivity of the red and nears low. 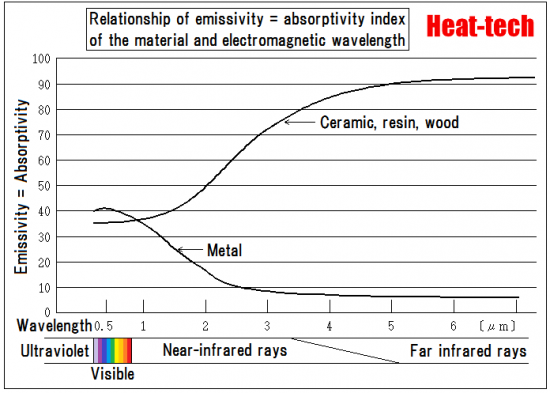 The above figure shows the trend with respect to the wavelength of emissivity (= absorptivity) of metals and nonmetals.
This is a general trend, the value will vary greatly depending on the individual substances.

Absorption rate is reduced as the wavelength becomes longer metal, and is not suitable for heating of the far-infrared heater.
And because you are suitable for heating of the near-infrared wavelength, is the best (about 1μm peak wavelength) halogen lamp heater.
Yet there is also a metal close to impossible heating of a metal material.
For example, the reflectance is higher in the visible to near infrared region, such as aluminum or copper, it is difficult to heat conduction heating also since it is a bonus.
However, these can also be heated by a surface state.
(For example, a fine irregularities, oxidative discoloration, hairline and satin.)

It’s impossible heat dissipation when body temperature and the ambient temperature is the same, because there is no heat transfer at zero deduction from received from around the energy of only the same energy that was radiated to the surroundings.

So easy to understand and likened to a human body, it was described as ” I “.
The same is true even if replaced with anything.
I feel warm that will temperature is increased, so “I feel cool feel” that, when the temperature is lowered.

2-4.The opening diameter and focal length

5-5.About reflection
2015-02-28
HEAT-TECH info
Previous: 4-1.Required for a halogen heater controller
Next: 5-2.About the temperature radiation intensity