Home / Air Blow Heater / Basic knowledge of Temperature controller / 4-9.PID control tips to get the best control in all 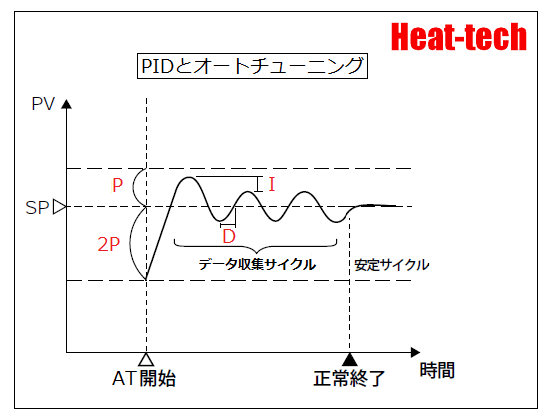 PID operation is common for temperature controllers and indicating controllers.
There is no difference in cost when using this in PI operation or in P operation alone.
Then it seems like using PID control, which should get the best control for all controls.

But everything in the world has its strengths and weaknesses.
There is no one thing that is good and no shortcomings.
PID control is not always good.

Depending on the purpose and application, P operation, PI operation, and PD operation may be more suitable than PID operation.

User need to use them properly.

Once the control target and the control device are determined, there are optimal control parameter values (proportional width X%, integration time Ti seconds, differentiation time Td seconds for PID control) that show the best response to them.

It is best to find the optimal control parameter value according to the control target and control device, and set it to that value.

So what is the best response?

The parameters affect each other in relation to each other, and if they are set, they will not work.
Optimal response is a compromise between these.

Therefore, there is no versatile initialization.

It must be set for each control target.

For that purpose, there is a PID auto tuning function.

PID auto-tuning collects data on the ease of heating of the equipment and the temperature reduction rate due to heat radiation cooling at the initial stage. The most common ones take data up and down three cycles and decide the parameters.

Therefore, if the machine is operated for a long time, the entire system will be warmed up and stored heat, causing a gap between the initial heating and heating time and the heat radiation and cooling time. This phenomenon is generally called “temperature drift”.

At many sites, in order to avoid parameter deviation due to temperature drift, PID auto-tuning is performed again after warm-up operation to acquire parameters.

In addition, some models reset the PID after a certain period of time.

However, PID auto-tuning is set on the premise that “use all PIDs”. In most cases, the optimal parameters will be set accordingly, but if user want more advanced control, understand and use the following characteristics.

● P-operation (proportional operation) alone has poor response and produces offset. However, in an environment where offset can be created, simple control without D and I may be better for equipment with extremely high response.

● I operation (integration operation) has control ability even by itself. Therefore, only I operation can be controlled. However, control response is much worse than PI operation. Suitable for control to avoid overshoot.

● In PI operation (proportional-integral operation), control response is slightly deteriorated, but overshoot is less likely to occur.
Also, if there is a large dead time, the higher the gain of the D operation becomes, the more unstable it becomes. In some cases, it is better not to have the D operation.

● D operation (differential operation) is used to improve control response. Unlike I operation, D operation has no control ability by itself. Used together with P operation and used as PD operation.

● In the case of PD operation (differential operation), when the target value changes, the control response is faster compared to P operation alone (differential time Td = 0).
It is suitable for control in which overshooting does not matter if the target temperature at the start is prioritized.
Temperature deviation cannot be converged in PD operation. If user make the D operation too effective, it will be the basis of hunting.

○ It will not overshoot.
× It takes a long time to settle up slowly.
If the value of xP is too large, the proportional operation will be effective from a temperature away from the target temperature, and it will take longer to reach, and the offset will also increase.

○ The time to reach the set value is shortened.
× Overshoot is likely to occur.
×If the value of P is set too small, the cycling phenomenon (hunting) will occur, approaching the on / off operation this time.

○ Hunting, overshoot, and undershoot are reduced.
× The time to reach the set value is longer.

● Reduction of I time

○ I get up early.
× Slow hunting may occur or overshoot / undershoot may be repeated to converge.
× It takes time to converge.

○ Responsiveness to disturbance temperature changes is improved.
× Overaction during disturbance increases and it takes time to return to the set value.