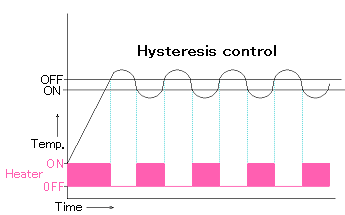 If it is turned ON and OFF at one point, the output will be chattered and will be more susceptible to noise.
For this reason, as shown in the figure, heating control usually has a range of ON-OFF, such as ON at low level and OFF at high level.
This width is called the setting width (adjustment sensitivity, movement clearance, dead zone).

The setting of the width of the ON point / OFF point differs depending on the control target. However, when the width is set narrower, the ON / OFF control is repeated as frequently as the ON-OFF control of one point setting, so that the target temperature is maintained.
However, if the setting width is set too narrow, the life of actuators such as relays and solenoid valves will be shortened, causing failure.
If the capacity of the electric heater or the diameter of the solenoid valve is large relative to the load of the actuator, hunting may occur because the control effect is delayed and affects the target.
Therefore, it is necessary to widen the setting range.

For example, the ON / OFF of the compressor of the refrigerator must be avoided frequently, so the setting range is large.
Generally, in the case of ON-OFF control or hysteresis control, the operating device has a relay (electromagnetic switch) or an electromagnetic valve, and the relay is used for an electric heater, etc. It is common to use.

In the hysteresis control, the manipulated variable is in the state of 0% -100% of ON-OFF, and the control result repeats cycling due to the delay of detection and the delay of heating effect.
Still, it is suitable for rough control.