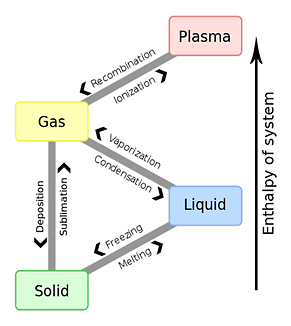 The phase transition of three states of matter.

Latent heat is a total amount of the thermal energy needed when a substance carries out a phase transition to a liquid or gas from a liquid from a solid.
There are the heat of fusion accompanying dissolution and evaporation heat (vaporization heat) accompanying evaporation in latent heat.

Joseph Black introduced the concept of latent heat.
Black showed that heat was absorbed without changing temperature in 1761, when ice is dissolution, and thought that heat matter (caloric) was connected with icy particles.
Moreover, producing the concept of calorific capacity or specific heat etc.contributed to development of thermology from the fact that the water of the volume and the rise in heat of mercury have a difference etc. 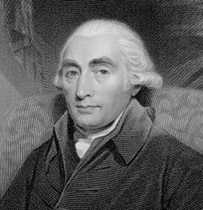 The heat of fusion is the heat required when the material a certain amount of a phase transition from a solid to a liquid.
The unit is J/g or J/mol, heat of fusion of ice is 333.5J / g.

Evaporation is a process in which the atom or molecule of a liquid state obtains sufficient energy, and will be in a gaseous state.
The evaporation from a liquid takes place at the temperature below the boiling point, and is steam pressure. It continues until it reaches maximum vapor tension, and it reaches and ends to a liquid phase balance there.

The molecule with the thermal agitation energy which overcomes the surface tension (intermolecular force) of a liquid can evaporate.
In other words, the evaporating molecule has the dynamic energy exceeding the work function about adhesion on the liquid surface.
Therefore, evaporation advances early more, so that surface tension is so low that the temperature of a liquid is high.

For example, heat of vaporization of helium is low and extremely 0.0845 kJ / mol is, because the van der Waals force acting between helium atoms is very small.
Since the hydrogen bond is working between the water molecules on the other, heat of vaporization is as large as 40.8 kJ / mol, of approximately 5 times the heat capacity when 100 ℃ from 0 ℃ to heating of water (7.53 kJ / mol) it becomes the value.

Although measurement of evaporation heat is made in the boiling point, the value usually rectified by the value of 298K (25℃) is used (since the change by compensation is below an error of measurement, it can be disregarded).
The unit has been used kcal / mol is (kilocalories per mole), but the notation kJ / mol and (kilojoules per mole) is mainstream.

Sensible heat is the quantity of heat spent without changing the state (phase) of a substance in order to change only temperature.

For example, 20℃ water is put into a kettle and it hangs on fire.
Heat was transmitted from fire to a kettle and temperature went up from 20℃ to 60℃.
The heat which water obtained at this time is sensible heat.

In the system which consists of many molecules etc., when the temperature of a system also rises simultaneously with the increase in internal energy, this microscopic dynamics energy is called sensible heat.

3-3.Heat balance equation of the drying

1-3.How to expressions the moisture in the material