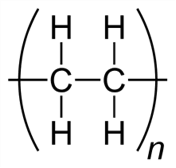 Thermoplastic resin is a solid polymer of one-dimensional structure (a set of polymer of linear structure), it is melted on heating and cooling will be solid.

Even the glass-transition temperature or the melting point is softened by heating, it is resin that can be molded into the shape of purpose.
In general, thermoplastic resins are often difficult to machining such as cutting and grinding, is pushed into a mold where it is heated softens, and cooled and solidified is then optionally injection molding is widely used to a final products.

Those who overcome the difficulty of cutting and machining is the “Engineering plastics”.

When resin is being heated, thermal motion of the molecules will be extensively, and molecular entanglement is loose.
As a result, the softer the polymer solid, it becomes a viscous liquid.

When heated more strongly, and then vaporized falling apart each molecule of polymer is made from carbon and hydrogen (pyrolysis).
The vaporization in order to be a high molecular weight and requires a considerable amount of heat.
And heated to just before the thermal decomposition occurs, pushing into the mold in a liquid state, it is the principle of molding a thermoplastic resin that is molded by cooling.

Becomes soft and heated, entitled “Thermoplastic resin” was born in the sense that the resin that can be freely formable state (plastic).
When the linear polymer added to the solvent and entangled polymer is loosened, the solvent molecules will melt coordinated around the polymer.
What kind of solvent is well coordinated (dissolution) is, is determined by the nature of the molecule and the solvent constituting the polymer.
Such thermoplastic linear polymer resin, polyvinyl chloride, polystyrene, and polyethylene.

Such as polystyrene, poly methyl methacrylate, polycarbonate is a non-crystalline, it also referred to as amorphous.
Polyvinyl chloride contains a fine crystal part, but as a whole I indicates the nature close to the non-crystalline.
Non-crystalline resin in the boundary of the glass transition temperature, and shows the hard glass state brittle at the low temperature side, and exhibits a soft, rubber-like properties at the high temperature side, the operating temperature in practical use is important.

Even though the crystalline resin, resin for only exist also non-crystalline regions without crystallization in part, but there are big what change in the nature in the vicinity of the glass transition temperature, otherwise, it has been relatively stable .

When cooled from a molten state, and then grow as spherulites folded radially from the crystal nuclei precipitated in the beginning.
Natural rays and spherulite increases will be opaque.
The bottle of polyethylene is opaque because its.

Since the size of the spherulites to affect the physical properties, it is important to align the spherulites by skillfully managing the cooling rate at the time of molding.

Crystalline resin to produce fine crystals of the the cell is oriented bundle by stretching, and the further heat treatment to align the crystals, it is heat resistant good resin with high strength.
This technology has been used in synthetic fibers and stretched film.
The degree of crystallinity of the resin can be easily measured by X-ray.

Basic knowledge of Resin heating 2.History of Resin-3 Chronology
2015-09-08
HEAT-TECH info
Previous: No.100 Differential temperature inspection of the heat pipe
Next: No.27 High temperature light sterilization of a spatula (scoopula)