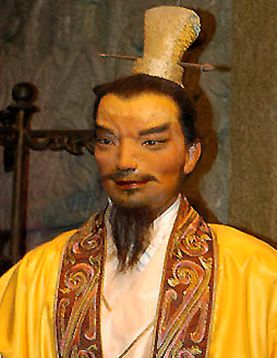 The old days of more than 2000 years from now,
Concept of humidity in the East appeared as “The Spirits of Dry and Wet”.
It is written in section 21 of 說山訓 Shuoshan ( Discourse on Mountains ) encyclopedia is written and edited by era Prince of Huainan Liu An depreciation of the Western Han Dynasty China called ” Huáinánz : 淮南子”.

To know the taste of the whole pan to lick a piece of meat, to know ” the Spirits of Dry and Wet “ in the air over the scales the difference in weight of coal smoke and moisture wings not breathe moisture.It reveals that large from small things.

Enough to be cited as “Record of Ancient Matters (古事記)” also  “Chronicles of Japan(日本書紀)” , “Huáinánz (淮南子) ” has affected a lot of Japanese culture is famous since ancient times in Japan.

Was written in the Edo period to the “Book of Divination Perpetual large library 永代三世相大蔵書 “ is a description of the balance type hygrometer based on the “Huáinánz (淮南子) “.

Shimizu Kinzaemon of Kamishiojiri Village (now Ueda, Nagano Prefecture) of Shinshu Ueda summarized in psychrometer book and the know-how of silkworm eggs production accumulated on its own.

Kinzaemon accumulated know-how, while experiencing many examples of failure of the silk-raising farmer.
The engraver, the printer and the painter were employed, the separate building of the house was made into the workplace, printing and bookbinding were carried out, and it published.
The marks which stuck and corrected paper are everywhere seen by the text.
It seems that it revised about 4 times by up to 1870. 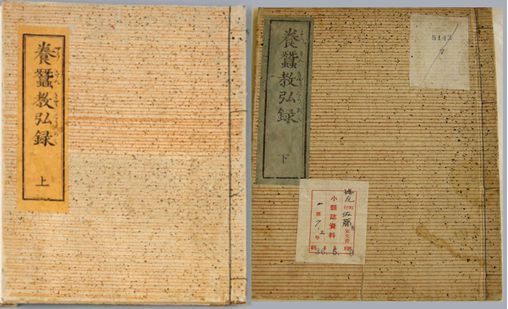 “How-To Sericulture 養蚕教弘録” which gets across to the Shimizu house of the posterity of Kinzaemon is two books First volume and Last volume.
Kinzaemon is the author of 1847 at 25-year-old.
Following the writing of the “people that should knowledge of sericulture”,
It is spelled out in detail the precautions to be followed to keep the silkworm is interspersed with illustrations.

Next, Kinzaemon started the creation of the instrument which measures the humidity of a silkworm-raising room.
It was his dream for the measure against humidity to be important for sericulture, to make a wet and dry bulb thermometer, to apply this to the silkworm-raising room of a silk-raising farmer, and to carry out humidity management scientifically.

He who returned to Shinshu noticed the tip of an ear of the wild grass which grows luxuriantly in the precincts of the “Kokage shrine 蠶影神社” where the house and the mulberry field did changing a form according to the weather.

Although the tip of an ear of Mekarugaya (scientific name : Themeda triandra var.japonica) of Poaceae is very sensitive to humidity and it is usually twisted on the left,
When it rotated on the right regularly with humidity, the twist returned and it dried conversely, it traced that there was character twisted on the left.

To fix this stalk, to cut the tip of an ear to an even length, and do attach a needle like a clock can it be filled with humidity and recognize condition easily?
Kinzaemon was considered so.

The psychrometer which gave the indicator which wound gold leaf around this tip of an ear, and attached the scale for the range with which an indicator suitable for sericulture touches was invented and manufactured, and was sold in the name of the “Physics New Factory 窮理新製作所”. 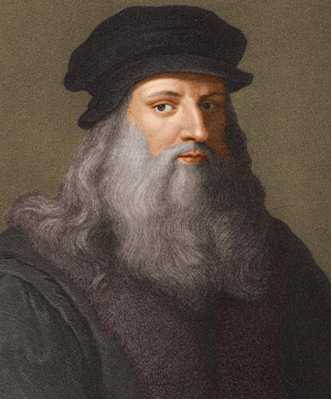 It is the Renaissance age that are delay and the scientific research on air started in the East in the West in 1700.
Leonardo da Vinci called inventor of a thermometer is also devising the easy hygrometer of a formula only in about a balance with the pendulum-type anemometer etc.

Since the dry cotton inhales humidity and becomes heavy, it is what obtained the hint, and one of the two of the ball of the same weight is wrapped in cotton, and one of the two applies a low, and already hangs these on the right and left of a balance.

Since cotton will become heavy and a balance will incline if humidity increases, it is the mechanism of reading the inclination condition in the way lowering weight and scale of middle. 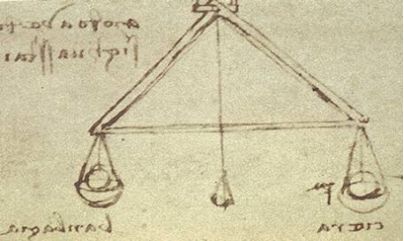 The hygrometer using the balance which Leonardo da Vinci considered 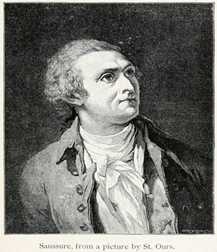 In order to use for measurement an alp, underground, underwater one, Saussure is improving and devising many measurement apparatus. 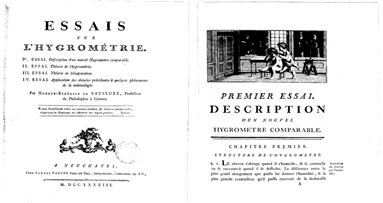 The experiment conducted in having been published in 1783 (Essai sur l’hygrométrie) with the hygrometer of various forms is recorded, and the predominance of his hair hygrometer to other hygrometers is proved. 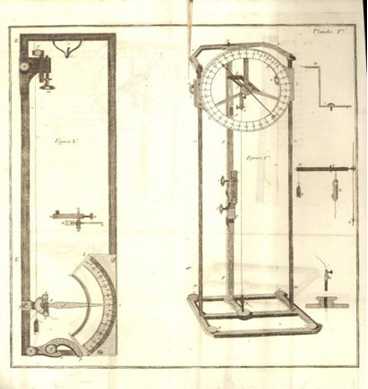 It is a hair hygrometer that Saussure included this in the instrument paying attention to hair expanding and contracting with humidity.
Fix one of the two of hair, one of the two is made to already connect weight, and it changes into the state where hair always stretched with the pin, and is the mechanism of moving an indicator by elasticity of hair.
It did not use as it is, but it degreased, and used hair.
It is because elastic change will increase also several times if it degreases.
Moreover, as a result of trying many things, it also turned out that blond hair with a young long woman is the optimal.
It is a hygrometer with sensitivity rather high with easy equipment.

French chemist Gay-Lussac hit on an idea of the dryness-and-moisture ball type hygrometer which measures the grade of evaporation by the fall of the temperature by evaporation heat — the August Psychrometer was devised by German chemist August Wilhelm von Hofmann in 1825. 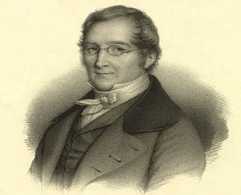 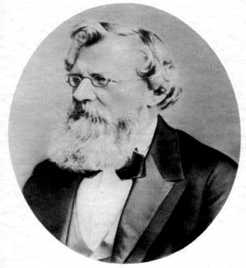 The August Psycrhometer is used for the measurement which opens a wet bulb and a dry bulb wide in the atmosphere, and it fixes.
When about 1-2% of error can be disregarded, the humidity calculator at the time of 1 atmosphere is used, without performing atmospheric pressure measurement.
The commercial psychrometer is the August psychrometer even now.
Having equipped the humidity calculator standardly, it is convenient. 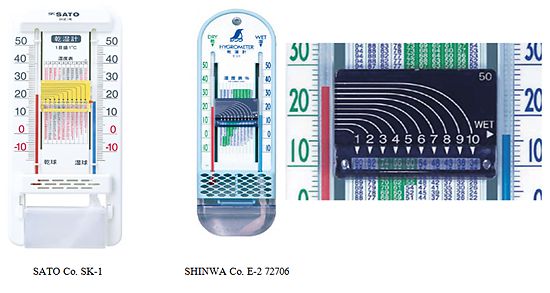 Since the grade of evaporation of a dryness-and-moisture ball type hygrometer was affected by the wind velocity which hits a ball part, a German meteorologist Assmann devised the Assmann aspirated psychrometer which will prepare a ventilator style in a dryness-and-moisture ball type hygrometer in 1887, and carries out this influence to regularity.

Threefold aspiration-psychrometer (Assmann type, prior to 1900)

A measurement portion is pasted together to a metaled (brass) thin board by making into admiration wet material the filter paper into which salt was infiltrated, and is rolled in the shape of spiral spring form a coil.

If humidity goes up, paper will absorb moisture and expand, on the other hand, since brass is inelastic, a coil transforms it, a spiral spring can wind it up, and it moves the indicator at a tip.

Since structure is simple and cheap, it has spread widely as home use, but an error may arise 10% or more and it is not high-precision.

Moreover, a coil may deteriorate in several years and it may become a life.

The inside of a bimetal type hygrometer 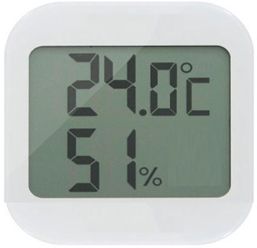 The electronic sensor of an electrical hygrometer has a thing of resistive and capacitive.
Both use porous ceramics or hygroscopic polymer membrane as humidity sensitive device.

In order to be unable to avoid the error (temperature drift) by a temperature change on the character of a measurement principle but to have to hold this down as an object for weather surveys to less than 0.2% of the humidity per 1℃ of temperature changes, with an actual product, the compensated circuit which used the temperature sensor is built in in many cases, and it is.

Moreover, since the variation per hour by surface corruption etc.is not avoided although the humidity sensitive device is equipped with the filter, periodical maintenance and proofreading are required.

The instrumental error permitted as an object for weather surveys is ±5% (in the case of for radiosondes 10% of humidity) of humidity.

2-1.What is the humidity?
2014-05-22
HEAT-TECH info
Previous: 2-6.Relationship of absolute humidity and the relative humidity
Next: 2-8.The principle of the Psychrometer