Home / Far-Infrared Heater / Science of the Infrared rays / 4. About heating 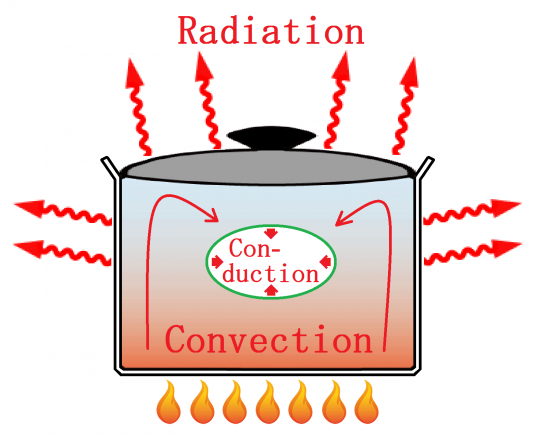 Heat conduction (or thermal conduction) is the transfer of internal energy by microscopic diffusion and collisions of particles or quasi-particles within a body due to a temperature gradient. The microscopically diffusing and colliding objects include molecules, electrons, atoms, and phonons. They transfer disorganized microscopic kinetic and potential energy, which are jointly known as internal energy. Conduction can only take place within an object or material, or between two objects that are in direct or indirect contact with each other. Conduction takes place in all forms of ponderable matter, such as solids, liquids, gases and plasmas.

Whether by conduction or by thermal radiation, heat spontaneously flows from a hotter to a colder body. In the absence of external drivers, temperature differences decay over time, and the bodies approach thermal equilibrium.

In conduction, the heat flow is within and through the body itself. In contrast, in heat transfer by thermal radiation, the transfer is often between bodies, which can be spatially separate. Also possible is transfer of heat by a combination of conduction and thermal radiation. In convection, internal energy is carried between bodies by a material carrier. In solids, conduction is mediated by the combination of vibrations and collisions of molecules, of propagation and collisions of phonons, and of diffusion and collisions of free electrons. In gases and liquids, conduction is due to the collisions and diffusion of molecules during their random motion. Photons in this context do not collide with one another, and so heat transport by electromagnetic radiation is conceptually distinct from heat conduction by microscopic diffusion and collisions of material particles and phonons. In condensed matter, such as a solid or liquid, the distinction between conduction and radiative transfer of heat is clear in physical concept, but it is often not phenomenologically clear, unless the material is semi-transparent. In a gas the distinction is both conceptually and phenomenologically clear.

In the engineering sciences, heat transfer includes the processes of thermal radiation, convection, and sometimes mass transfer. Usually more than one of these processes occurs in a given situation. The conventional symbol for the material property, thermal conductivity, is k.

Conduction will take place if there exist a temperature gradient in a solid (or stationary fluid) medium.
Energy is transferred from more energetic to less energetic molecules when neighboring molecules collide. Conductive heat flow occur in direction of the decreasing temperature since higher temperature are associated with higher molecular energy.
Fourier’s Law express conductive heat transfer as

Convection is the concerted, collective movement of groups or aggregates of molecules within fluids (e.g., liquids, gases) and rheids, either through advection or through diffusion or as a combination of both of them. Convection of mass cannot take place in solids, since neither bulk current flows nor significant diffusion can take place in solids. Diffusion of heat can take place in solids, but that is called heat conduction. Convection can be demonstrated by placing a heat source (e.g. a Bunsen burner) at the side of a glass full of a liquid, and observing the changes in temperature in the glass caused by the warmer fluid moving into cooler areas.

Convection can be qualified in terms of being natural, forced, gravitational, granular, or thermomagnetic. It may also be said to be due to combustion, capillary action, or Marangoni and Weissenberg effects. Heat transfer by natural convection plays a role in the structure of Earth’s atmosphere, its oceans, and its mantle. Discrete convective cells in the atmosphere can be seen as clouds, with stronger convection resulting in thunderstorms. Natural convection also plays a role in stellar physics.

Thermal radiation is electromagnetic radiation generated by the thermal motion of charged particles in matter. All matter with a temperature greater than absolute zero emits thermal radiation. When the temperature of the body is greater than absolute zero, interatomic collisions cause the kinetic energy of the atoms or molecules to change. This results in charge-acceleration and/or dipole oscillation which produces electromagnetic radiation, and the wide spectrum of radiation reflects the wide spectrum of energies and accelerations that occur even at a single temperature.
Examples of thermal radiation include the visible light and infrared light emitted by an incandescent light bulb, the infrared radiation emitted by animals and detectable with an infrared camera, and the cosmic microwave background radiation. Thermal radiation is different from thermal convection and thermal conduction—a person near a raging bonfire feels radiant heating from the fire, even if the surrounding air is very cold.
Sunlight is part of thermal radiation generated by the hot plasma of the Sun. The Earth also emits thermal radiation, but at a much lower intensity and different spectral distribution (infrared rather than visible) because it is cooler. The Earth’s absorption of solar radiation, followed by its outgoing thermal radiation are the two most important processes that determine the temperature and climate of the Earth.
If a radiation-emitting object meets the physical characteristics of a black body in thermodynamic equilibrium, the radiation is called blackbody radiation. Planck’s law describes the spectrum of blackbody radiation, which depends only on the object’s temperature. Wien’s displacement law determines the most likely frequency of the emitted radiation, and the Stefan–Boltzmann law gives the radiant intensity.

1-9.How to expressions the constant drying period