There are two main types of reflection.

Regular reflection refers to reflection that holds the “law of reflection” in which the angle of incidence and the angle of reflection of light incident from a light source are equal.
In the case of glossy metal, it almost reflects the incident light. This is because when light is incident on the plane of a metal, the free electrons accelerate, the motion of the free electrons becomes intense, an electric current is generated, and a magnetic field is generated. This oscillating magnetic field generates new electromagnetic waves. The frequency of this newly created electromagnetic wave is equal to the incident electromagnetic wave. It can be said that it actually looks like it is reflecting, not reflecting.
The motion of free electrons has a great influence on the reflection of metal, and metals with low electrical resistivity tend to have high light reflectance. 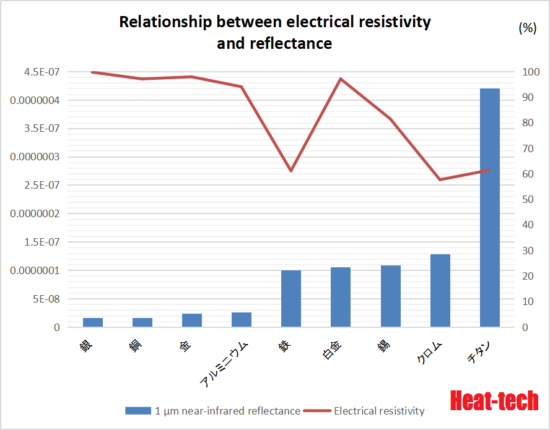 From the above table, silver, copper, gold, and Aluminium, which have low electrical resistivity, have high reflectance of 1μm near infrared rays, and the reflectance tends to decrease as the electrical resistivity increases.
Among the metals with high reflectivity of 1μm near infrared rays, silver chemically reacts with hydrogen sulphide in the air to discolour, and copper chemically reacts (oxidizes) with oxygen in the air to discolour when heated. Since it is made of metal, it is problematic to use it as a Condensing mirror for heaters. Gold and Aluminium are suitable which are resistant to discolouration and oxidation. 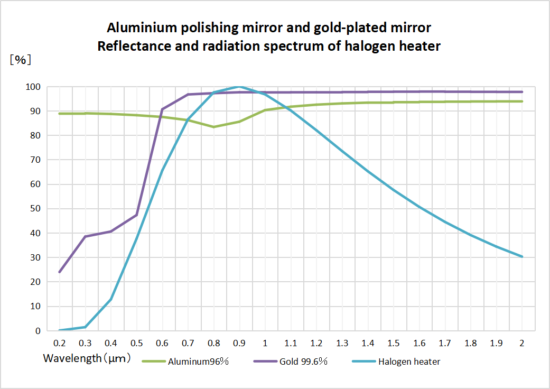 The maximum wavelength when using a halogen heater at maximum output is approximately 1μm. At this time, there is a difference of about 10% when comparing Aluminium and gold, and gold has higher reflectance. For example, Aluminium has a higher reflectance when compared with wavelengths in the visible light and ultraviolet regions of 0.5 μm. The material changes depending on which wavelength of light is reflected. From a heating point of view, gold is an efficient condensing mirror because the wavelengths of visible and infrared rays contribute to heating.

With non-metal reflections, unlike specular reflections, the light emitted by an object is emitted evenly in all directions at any angle.
The reason why white paper looks white in the visible light region is due to this diffuse reflection, which reflects all light (electromagnetic waves). In other words, a white object absorbs light without bias. An object that absorbs only red light and reflects blue and green light is resulting in a greenish blue cyan.
In addition, white paper such as tissue paper is a material in which fine fibers and fibers are woven. Unlike the specular reflection of glossy metal, white paper is not glossy despite its high reflectance because the unevenness of the net reflects and refracts light in various directions. Reflectances of metal and non-metal cannot be compared simply by numerical values, and it is necessary to pay attention to the direction in which light is reflected. 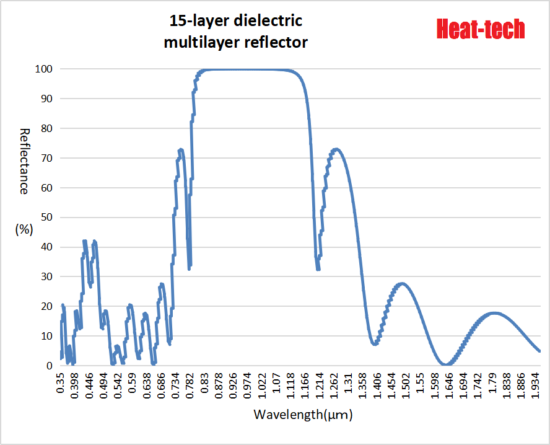 When the design wavelength is 1μm, if the material is adjusted to 1/4 of the optical path length (refractive index n x film thickness d), it is possible to make a reflector with a reflectance close to 100% for near infrared rays of 1μm.