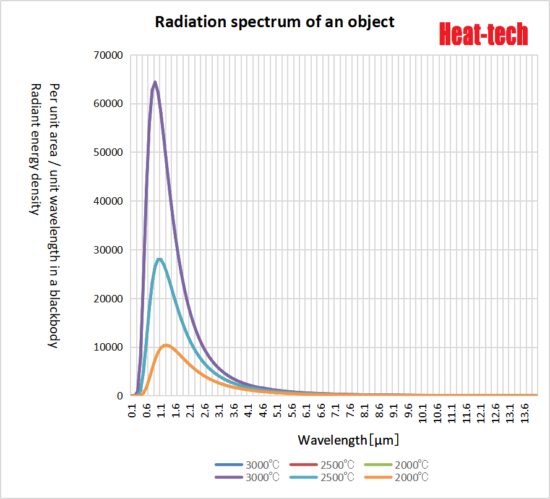 Example 1. In the case of metal, a halogen heater is advantageous because radiation with a shorter wavelength generally has a higher absorption rate. When heating with a far-infrared heater, the temperature rises to a certain level due to the difference in wavelength and density, but it does not rise to the heating temperature of the halogen heater.

Example 2, if the external dimensions of the heater are the same, a halogen heater with a short wavelength and high output is generally advantageous. It is difficult to heat with high output with a far infrared heater, and it does not rise to the heating temperature of a halogen heater.

Example 1: When white paper with black letters printed on it is heated with a far-infrared heater, the overall temperature rises relatively. In the case of a near-infrared heater, the black letters are heated more strongly than the other white areas, causing unevenness in the heated areas. The cause of this is that the infrared absorption rate differs depending on the colour, and the near-infrared heater has a high heating element temperature and the difference between the maximum wavelength and other wavelengths is large.

Light emitted from a lamp and incident on an object is partially reflected and partially absorbed by a normal opaque object. The absorbed light contributes to heating. By covering the light reflected from the object with a dome-shaped material with high reflectance, the light reflected from the object is re-reflected and incident on the object, and some light is absorbed again. By repeating this cycle, Efficient heating is possible in a short time. It is best to cover the object in a dome shape, but it is also effective to just surround the object.
This method is called the “reflex heating method”. For details, refer to the “Reflex heating method” page.