in Brazing with Heater

Difference between Brazing and Soldering

◎Since there is no need to heat the base material to the melting point, there is little thermal effect on the base material, making it easy to join thin and small objects.
◎ It is hard to deteriorate the base material.
◎Possible to join dissimilar materials with different melting points.
[Caution] Brazing with different thermal expansion coefficients causes the brazing layer to tear due to the difference in shrinkage during cooling, so it is necessary to consider the joint method.
◎Because brazing has a lower melting point than the base material, it is possible to remove or rejoin brazed points by reheating.
*When brazing two parts close to each other in two steps, it is possible to avoid remelting the first time by using brazing filler material with different melting points.
◎ Unlike mechanical joining methods such as bolting, airtight and watertight sealing is possible.
◎Complicated shapes with many joints can be joined. (Multi-point batch joining)
◎It is electrically conductive unlike bonding with adhesive.
◎ It does not require as much skill as shielded arc welding, and the work procedure can be learned in a relatively short period of time.
◎By considering the shape of the joint, it is possible to create a joint with strength comparable to that of the base material.
◎ The work can be relatively automated.

Alloys can also be used as brazing filler metals if they conform to these requirements.
In reality, other factors such as workability, work load, and economic efficiency are also important options, and the types of brazing filler materials that can be used are limited.

The action of flux is to remove the oxide film on the metal surface, and the flux chemically reacts with the oxide to create a product (metal salt) that dissolves and removes.

When steel or copper is brazed with borax or boric acid as a flux, the oxide film is dissolved and removed by the following reactions.

Flux does not have the effect of removing thick oxides such as rust on the surface of the base material, coating materials, oils and fats, dirt, etc.
Therefore, it is necessary to remove these foreign substances before brazing.
If foreign matter such as oil or scale adheres to the base material, the flux will not work properly.
These foreign substances can be sufficiently removed by degreasing and polishing.
Also, the melting point of flux is generally 50℃ lower than that of brazing filler material.

Heating work is indispensable for brazing.
Therefore, the thermal effects of heating on the base material cannot be avoided, and structural changes such as oxidation, softening, hardening, and coarsening of the surface of the base material occur.

the Points of Brazing Heat 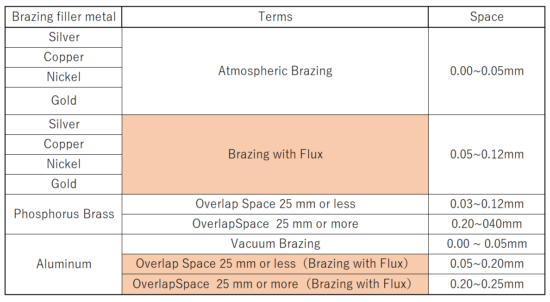 No.17 Brazing of Mini Valve