Home / Far-Infrared Heater / Science of the Infrared rays / 1. The discovery of the infrared rays

<Science of the Infrared rays -INDEX- >

Infrared ray was discovered in the genius of versatility. 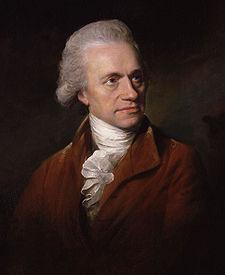 Sir Frederick William Herschel, KH, FRS (German: Friedrich Wilhelm Herschel; 15 November 1738 – 25 August 1822) was a Hanoverian-born British astronomer, technical expert, and composer. Born in the Electorate of Hanover, Herschel followed his father into the Military Band of Hanover, before migrating to Great Britain at the age of nineteen. He became famous for his discovery of the planet Uranus, along with two of its major moons, Titania and Oberon, and also discovered two moons of Saturn. In addition, he was the first person to discover the existence of infrared radiation. He is also known for the twenty-four symphonies, and many other musical pieces, that he composed.

Herschel was born in the Electorate of Hanover, part of the Holy Roman Empire, one of ten children of Isaac Herschel by his marriage to Anna Ilse Moritzen. His family were Lutheran Christians, probably descended on his father’s side from converted Moravian Jews. His father was an oboist in the Hanover Military Band. In 1755 the Hanoverian Guards regiment, in whose band Wilhelm and his brother Jakob were engaged as oboists, was ordered to England. At the time the crowns of Great Britain and Hanover were united under King George II. As the threat of war with France loomed, the Hanoverian Guards were recalled from England to defend Hanover. After they were defeated at the Battle of Hastenbeck, Herschel’s father Isaak sent his two sons to seek refuge in England in late 1757. Although his older brother Jakob had received his dismissal from the Hanoverian Guards, Wilhelm was accused of desertion (for which he was pardoned by George III in 1782). Wilhelm, nineteen years old at this time, was a quick student of the English language. In England he went by the English rendition of his name, Frederick William Herschel.

In addition to the oboe, he played the violin and harpsichord and later the organ. He composed numerous musical works, including 24 symphonies and many concertos, as well as some church music. Six of his symphonies were recorded in April 2002 by the London Mozart Players, conducted by Matthias Bamert (Chandos 10048).

Herschel’s music led him to an interest in mathematics and lenses. His interest in astronomy grew stronger after he made the acquaintance of the English Astronomer Royal Nevil Maskelyne. He started building his own reflecting telescopes and would spend up to 16 hours a day grinding and polishing the speculum metal primary mirrors. He “began to look at the planets and the stars” in May 1773 and on 1 March 1774 began an astronomical journal by noting his observations of Saturn’s rings and the Great Orion Nebula (M 42).

Herschel’s early observational work soon focused on the search for pairs of stars that were very close together visually. Astronomers of the era expected that changes over time in the apparent separation and relative location of these stars would provide evidence for both the proper motion of stars and, by means of parallax shifts in their separation, for the distance of stars from the Earth (a method first suggested by Galileo Galilei). From the back garden of his house in New King Street, Bath, and using a 6.2-inch aperture (160 mm), 7-foot focal length (2.1 m) (f/13) Newtonian telescope “with a most capital speculum” of his own manufacture, in October 1779, Herschel began a systematic search for such stars among “every star in the Heavens”, with new discoveries listed through 1792. He soon discovered many more binary and multiple stars than expected, and compiled them with careful measurements of their relative positions in two catalogues presented to the Royal Society in London in 1782 (269 double or multiple systems) and 1784 (434 systems). A third catalogue of discoveries made after 1783 was published in 1821 (145 systems).

In 1797 Herschel measured many of the systems again, and discovered changes in their relative positions that could not be attributed to the parallax caused by the Earth’s orbit. He waited until 1802 (in Catalogue of 500 new Nebulae, nebulous Stars, planetary Nebulae, and Clusters of Stars; with Remarks on the Construction of the Heavens) to announce the hypothesis that the two stars might be “binary sidereal systems” orbiting under mutual gravitational attraction, a hypothesis he confirmed in 1803 in his Account of the Changes that have happened, during the last Twenty-five Years, in the relative Situation of Double-stars; with an Investigation of the Cause to which they are owing. In all, Herschel discovered over 800 confirmed double or multiple star systems, almost all of them physical rather than virtual pairs. His theoretical and observational work provided the foundation for modern binary star astronomy; new catalogues adding to his work were not published until after 1820 by Friedrich Wilhelm Struve, James South and John Herschel.

In March 1781, during his search for double stars, Herschel noticed an object appearing as a nonstellar disk. Herschel originally thought it was a comet or a star. He made many more observations of it, and afterwards Russian Academician Anders Lexell computed the orbit and found it to be probably planetary. Herschel determined in agreement that it must be a planet beyond the orbit of Saturn. He called the new planet the ‘Georgian star’ (Georgium sidus) after King George III, which also brought him favour; the name did not stick. In France, where reference to the British king was to be avoided if possible, the planet was known as ‘Herschel’ until the name ‘Uranus’ was universally adopted. The same year, Herschel was awarded the Copley Medal and elected a Fellow of the Royal Society. In 1782, he was appointed “The King’s Astronomer” (not to be confused with the Astronomer Royal). He and his sister subsequently moved to Datchet (then in Buckinghamshire but now in Berkshire) on 1 August 1782. He continued his work as a telescope maker and achieved an international reputation for their manufacture, profitably selling over 60 completed reflectors to British and Continental astronomers.

Discovery of infrared radiation in sunlight

On 11 February 1800, Herschel was testing filters for the sun so he could observe sun spots. When using a red filter he found there was a lot of heat produced. Herschel discovered infrared radiation in sunlight by passing it through a prism and holding a thermometer just beyond the red end of the visible spectrum. This thermometer was meant to be a control to measure the ambient air temperature in the room. He was shocked when it showed a higher temperature than the visible spectrum. Further experimentation led to Herschel’s conclusion that there must be an invisible form of light beyond the visible spectrum. 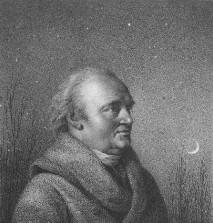 Herschel in his later years 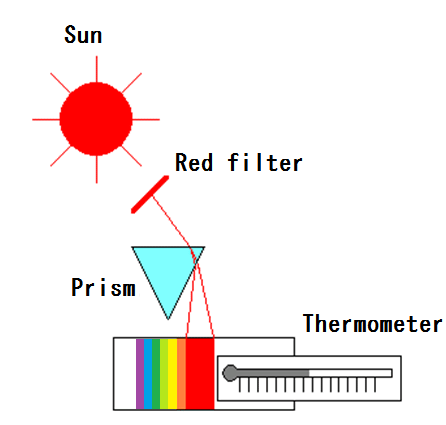 In 1801, after hearing about the discovery of “heat rays” (infrared radiation) by William Herschel (in 1800), Ritter (Johann Wilhelm Ritter (16 December 1776 – 23 January 1810) was a German chemist, physicist and philosopher.) looked for an opposite (cooling) radiation at the other end of the visible spectrum. He did not find exactly what he expected to find, but after a series of attempts he noticed that silver chloride was transformed faster from white to black when it was placed at the dark region of the Sun’s spectrum, close to its violet end. The “chemical rays” found by him were afterwards called ultraviolet radiation.