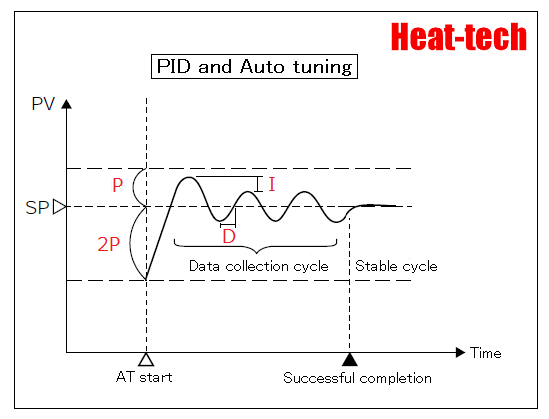 It is thought that it can be controlled well by proportional control, but in reality, there is a problem when the current value approaches the set value.

This slight error is called “Offset”.

Offset means that the small difference between the set value and the current value continues at a constant value.
To put it simply, it’s a gap.

Integral control is used to eliminate this offset.
In other words, the slight difference is accumulated in time, and the operation is performed so that the difference (offset) is eliminated by increasing the operation amount at a certain size.

Control that adds integral action to proportional action in this way is called “PI control.”

As explained in the previous section, proportional control is control that performs heating in proportion to the difference (deviation) between the current value and the set value within the proportional band. It is set 5to10%.

● Why does offset appear?

In the proportional control, the heating amount becomes too small in consideration of the stability near the set value, and the control cannot be performed more finely. The result will be stable with the current value very close to the set value. Because it keeps the status quo and does not reach the amount of heat needed to change it.

● When does the offset appear?

① The heating target is too large or too small.

If a large load is applied compared to the conditions under which the equipment or system was designed, the amount of heat taken off by this load will increase, so that it will stabilize below the set value. Conversely, when a lightly loaded object is inserted, the opposite is true, and it is stable at high places.

② When the ambient temperature of the device changes

③ When the set value is changed

● What is controller doing inside?

First, it is premised that offset is not theoretically eliminated by proportional control alone. Considering the current situation that is stable even after a long time, it is clear that some output signal is output from the controller. However, at the current output, the power is insufficient and it is stable without reaching the target value.

Until the integral of the difference between the present value PV becomes zero and the set value SV temperature is reached, the integral control shifts the proportional band from the original SV to a higher temperature and outputs it to eliminate the offset.

● Integral control is a correction operation that adjusts the output to make the offset zero within the set time.

Integral control has control ability even by itself. Therefore, only I operation can be controlled. However, control response is significantly worse than PI control.
In the early days of analog control, I-operation-only control was sometimes used because it could be simple and cheap. However, they are rarely used these days.