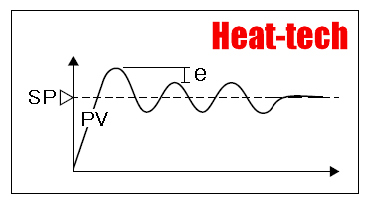 Control is derived from the Latin contrarotulare, where contra means “to” and rotarye means “scroll”. When these are combined, the control comes from the fact that “if there is a difference, it will be corrected according to the authority (standard) described on the scroll”.
In JIS terms, control is defined as “adding necessary operations to a target object so as to fit a certain purpose.”

Good control is control that does not change and does not violate.
1. Fewer transients = better responsiveness, less overshoot to hunting
2. Fast transition to steady state = good stability
3. No steady-state error (Offset)
There are three features.

What should be done next after measuring the manipulated effects? How to think and control

According to the preset time period, it is turned on for a certain time and turned off for the remaining time. This preset time period is called the control period. It seems that there are many things that can be set freely from 10 to 0.5 seconds.

(1) The gap for ON-0FF operation.
From turning off the heater temporarily until turning it on again
Also called Hysteresis

Heating operation is delayed for a certain time
Dead time appears when the operation point and the detection point are separated to some extent.
The longer the dead time, the more likely the control result is hunting or over-shoot. For temperature control, it is necessary to minimize the dead time as much as possible.

When the control starts or when the target value is changed, how to respond quickly

The temperature goes beyond the set value

Outside work to disturb something in a stable state

A deviation in which the manipulated variable becomes too small and the controlled side remains unresponsive.
① Stable deviation from the set value.
(2) In the proportional operation, a certain error occurs even if a stable state is reached due to the heat capacity and heater capacity of the control target. This error value.
When this condition is corrected, it is said to be “filling the offset (reaching the set value)”.

Thermal size required by the object to be heated