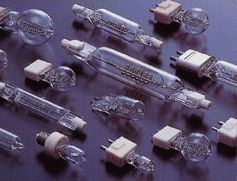 Halogen lamps evolved from incandescent light bulbs. Carbon fiber was used for the filament of the early heat-generating light bulbs. Metal filaments such as osmium and tantalum were being developed, but they did not reach the general public due to problems with price and AC lighting. Dr. W.R. Whitney of the United States discovered that the cause of light bulb blackening is significantly influenced by the presence of certain ash oxides in addition to evaporated carbon. As a countermeasure, heat treatment was performed at a temperature much higher than the operating temperature of the filament to reduce the oxide of ash and suppress blackening during the lifespan. By this heat treatment, the plane condition of the filament becomes hard and strong, and it has metal-like properties, and the operating temperature rises by 200℃, making it possible to use up to 1900℃. Although carbon has a high melting point of about 3500℃, it could not be used at high temperatures due to its high vapor pressure in the high temperature range and rapid evaporation (sublimation). Until the development of tungsten light bulbs, this heat-treated carbon filament incandescent light bulb became the mainstream.

Since then, new filaments other than carbon have been continuously developed, and attention has been focused on tungsten, which has a melting point of 3360℃. Attempts have been made to make tungsten solid or linear from powder, but this has not happened, and in 1905 Australia’s A. Just and F. Hanaman chemically manipulated tungsten into filaments. I succeeded in making it. We were able to obtain twice the efficiency of carbon, but the drawback was that the filament was very brittle and difficult to handle. In 1908, W. Dcoolidge discovered that various processing of tungsten improved its mechanical strength, solved the brittleness of tungsten, and put it into practical use in 1910.

The blackening phenomenon occurred in the tungsten light bulb as well as the carbon filament. I. Langmuir of the United States discovered that the cause of the blackening phenomenon of a light bulb was the evaporation of a tungsten filament, and found that the amount of evaporation was reduced by enclosing an inert gas inside the light bulb. It was also discovered that the inert gas caused the filament to be wrapped in a layer of the inert gas, causing heat loss. In conclusion, gas-filled light bulbs cause energy loss due to heat conduction and convection, but suppress the evaporation of tungsten, so if a gas with small heat conduction is used, the filament temperature can be higher than that of a vacuum light bulb for the same lifespan. It turned out that it could be bigger and eventually more efficient. Since this heat loss affects the length of the filament, we succeeded in reducing the heat loss by changing the filament from a straight line to a coil, and a light bulb containing single coil gas was born. Initially, nitrogen was used as the inert gas. Since then, gas with a small amount of nitrogen enclosed in argon, which has a low thermal conductivity and a large molecular weight (high evaporation suppression effect), has been adopted as the mainstream.

Halogen bulbs were developed by E.G.Zebler in the United States in 1959. Halogen bulbs had the characteristic that the working characteristics (speed of light maintenance rate during the lifespan) hardly changed. The use of halogen elements was studied in 1915, but it was not commercialized due to the lack of thermodynamic elucidation and quartz glass processing technology. The halogen gas enclosed in the lamp dissociates atomically in the high temperature part during lighting and combines with the evaporated tungsten to form tungsten halide with high vapor pressure, preventing the tungsten from depositing on the inner plane of the glass bulb. be doing. If the bulb is kept within the temperature range where the tungsten compound does not deposit and the temperature does not dissociate, blackening will not decrease. In addition, due to the filament that became hot during lighting, the tungsten halide separated when it reached 1400℃ or higher, and the tungsten returned to the filament, so it was possible to suppress the wear of the filament. In order to meet these conditions, it was necessary to have a small size and high output, and heat-resistant quartz glass was used for the glass bulb. The halogen bulb that was put into practical use in 1959 was a double-terminal bulb that contained iodine and was announced for floodlighting. Recently, bromine is enclosed to stabilize the lifespan characteristics. After that, the double-terminal type was improved and a single-terminal type lamp was developed. Halogen and incandescent bulbs for general lighting are now being phased out in European countries due to their lower proportion of visible light than LED bulbs.

No.41 Development of crystal structure of magnetic substance 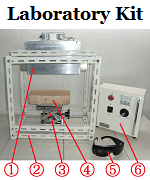