Halogen lamps are incandescent lamps that contain an inert gas and a small amount of halogen gas inside the lamp.

Inactive gas includes helium (He 4.00g/mol), neon (Ne 20.18g/mol), (nitrogen (N2 28.02 / mol)), argon (Ar 39.95g/mol), (carbon dioxide (CO2 44.01g/mol)). There are mol))), krypton (Kr 83.80 / mol), xenon (Xe 131.29g/mol) and radon (Rn 222.000 / mol).
Helium, neon, argon, krypton, xenon, and radon are also called noble gases and rare gases because they are contained only in trace amounts in the air.
The larger the atomic weight, the more effective the evaporation suppression effect of tungsten used for the filament. The larger the atomic weight, the lower the thermal conductivity and the more the filament heat loss can be suppressed. Luminous efficiency increases by 5 to 10%.
Theoretically, radon, which has the highest atomic weight, is highly effective. However, radon cannot be used because it is a harmful radioactive gas that emits alpha rays with a short half-lifespan. It cannot be used because it is thermally decomposed.
Therefore, it can be said that xenon is the most effective for evaporation of tungsten.
However, xenon and krypton are expensive, so they are rarely used, and among the inert gases, argon, which is cheaper, is used.
However, since argon alone does not have sufficient electrical insulation, arc discharge will occur if the filament breaks when it is lit. As a countermeasure, a small amount of nitrogen, which has high electrical insulation, is mixed. .. In a miniaturized lamp, if the filament is short, the load of electricity will increase, so the lifespan will be shortened, but in some cases, only nitrogen, which has high electrical insulation, will be used.

The chemical materials used to remove impurities in vacuum-based products are called getters.
In an incandescent bulb, if a small amount of water or impurities such as oxygen are mixed in the bulb, it causes a water cycle, consumes tungsten and shortens the lifespan, so it is necessary to remove the water in the bulb. Various getters are being researched and developed as countermeasures. Incandescent light bulbs use a phosphorus getter to create a vacuum during the manufacturing process. This is a method of immersing a tungsten filament in a mixed solution of phosphorus and water, energizing the lamp after exhausting it, and generating a glow discharge to remove residual gas. Phosphorus getters are used to increase the degree of vacuum, but in addition, halogen elements are enclosed as getters to prevent the blackening phenomenon.
The method of using halogen elements as getters to reduce blackening has been adopted for a long time, and in 1892, a carbon filament bulb containing chlorine was released. In 1933, a patent was proposed to enclose iodine and turn the evaporated tungsten into iodide tungsten to prevent it from adhering to the valve. In this way, the conventional method of encapsulating a halogen compound in a light bulb has the effect of preventing blackening of the bulb, but it has a problem of reacting with the tungsten filament in the low temperature part and shortening the lifespan, so it has not been put into practical use much. It was. In addition, iodine needs to be vaporized at the time of manufacture and put into the valve, and there are drawbacks such as a narrow range of stable halogen cycle, so other halogen gases are considered. In 1965, Philips Jampens and van der Weijer introduced light bulbs using organic compounds of bromine. Since bromine compounds (CHBr3, CH2Br2, etc.) have high vapor pressure, they can be encapsulated as a gas as they are, and because of their high activity, it has become possible to expand the types of halogen bulbs. Later, chlorine compounds were also used in copier exposure lamps.
Zirconia is often used as a getter for general light bulbs. However, in the case of halogen lamp heaters, this is difficult to use, so tantalum (Ta) is often used. Tantalum is a soft melting point metal similar to lead, and absorbs hydrogen several hundred times its volume in the dark red heat state (about 700℃), so this metal is used for the support parts of the filament to act as a getter. I am.
Of course, some lamp heaters of 2200K or less contain halogen. If halogen is added, it works in a direction that inhibits the water cycle, so if the residual water content is low, a heater with a long lifespan can be made. This is often because it is cheaper to add halogen. To make a highly reliable lamp heater with a lifespan of 5,000 to 20,000 hours, it is safer to put a getter without halogen than to put a halogen.

Halogen lamps are a type of incandescent lamp in which a trace amount of halogen gas is enclosed in an inert gas such as argon or nitrogen.
By enclosing halogen gas, it is possible to prevent the wear of tungsten, which is the material of the filament, and to raise the temperature of the filament, so that the blackening of the lamp does not decrease, and the brightness of the light does not decrease. There are merits. This is due to the halogen cycle. Tungsten filaments that have become hot while the lamp is lit evaporate into atoms and move inside the lamp. When moving, it combines with the halogen in the lamp to form tungsten halide. Tungsten halogenated moves near the filament by convection and diffusion. When the temperature of tungsten halide rises above 1400℃ due to the filament that has become hot during lighting, it separates and the tungsten returns to the filament, and the halogen forms the evaporated tungsten and tungsten halide again. This cycle is called a halogen cycle.
In order to realize a halogen cycle, it is necessary to use a material that keeps the inner wall of the bulb of the lamp at 250℃ or higher when it is lit. Therefore, heat-resistant quartz glass is used for the bulb.
The evaporated tungsten returns to the filament, but it is not completely restored. There are variations in where tungsten eventually returns to the filament during the halogen cycle. Evaporation is promoted locally, the temperature of that part rises at an accelerating rate, and the line breaks at the so-called hot spot. Repeated halogen cycles create irregularities in the filament, which eventually causes the line to break. 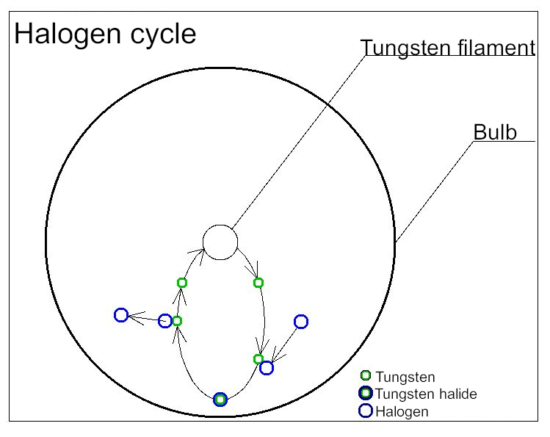 The higher the pressure of the filled gas, the longer the lifespan of the bulb with respect to efficiency. Pressurization increases the density of gas molecules, and the evaporated tungsten collides with the gas molecules, suppressing the movement of tungsten. Evaporation is suppressed as the vapor pressure around the filament rises and approaches saturation.
As a method of enclosing gas in a halogen lamp, a bulb in which a glass exhaust pipe is welded is used, and after the inside of the bulb is evacuated, the encapsulating gas is filled while cooling with liquid nitrogen. Liquid nitrogen liquefies the enclosed gas, reducing its volume and reducing the internal pressure.
The enclosed gas is enclosed at a high pressure of 1×10 ^ 5 ~ 4×10 ^ 5Pa.
The pressure while the gas is lit reaches 1.3 to 7.0 times the static pressure.