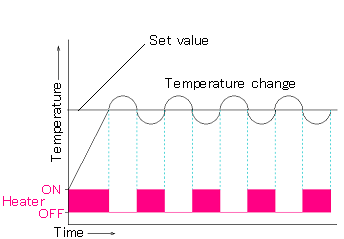 The advantage of ON-OFF control is that the configuration is simple and inexpensive.

The disadvantage is that in ON-OFF control, the output is turned on and off by the set value, so the output may frequently turn on and off (chattering) even with a slight temperature change at the boundary surface.
As a result, the life of the output relay is shortened and the connected equipment is adversely affected.
To prevent this, on models where the control cycle can be freely fixed, chattering is prevented by making one cycle longer.
Another measure is to provide a clearance (hysteresis) between the ON and OFF operations.
Hysteresis control is explained in the next section.