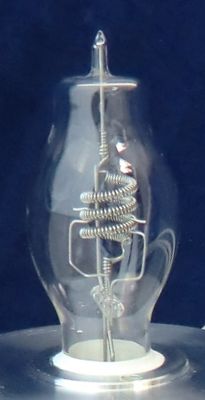 Due to the halogen cycle, halogen lamp bulbs must be heat-resistant glass with a temperature of 250℃ or higher when lit. In addition, the inert gas and halogen gas in the bulb are sealed at a high pressure of 1×10 ^ 5 ~ 4×10 ^ 5Pa, and the pressure during lighting reaches 1.3 to 7.0 times this. Quartz glass is used for this reason. Quartz glass is a material with an extremely low coefficient of thermal expansion, so even if there is a temperature difference on the plane of the glass, the thermal stress becomes small, and it is possible to cope with sudden temperature changes. Quartz glass is a highly pure substance, but it contains a small amount of impurities. The leaching of these impurities is highly related to the temperature, and in the case of quartz glass, the leaching of impurities and the intrusion of enclosed gas begin at around 800℃. The bulb temperature of halogen lamps should be kept below 800℃, preferably below 700℃ because of the relationship between impurities and temperature. If the gas balance inside the halogen lamp changes, it may cause a blackening phenomenon or a short lifespan.
A small amount of water is mixed in this impurity. Glass is a water resistant material and the water inside the glass is not visible and is usually not a problem. This water exists as a hydroxyl group (hydroxy group) at high temperatures. Hydroxy groups dissolve in the lamp when the temperature rises above 600℃, causing a water cycle even with a small amount of water and promoting the consumption of tungsten. In the “water cycle”, water vapor is decomposed on the plane of high temperature tungsten to become tungsten oxide and atomic hydrogen. Tungsten oxide evaporates and adheres to the glass wall, and atomic hydrogen deprives this oxide of oxygen and returns it to water vapor. It is a phenomenon understood that the evaporation of tungsten is repeated and the consumption is accelerated by this repetition.
At this time, the halogen cycle is occurring at the same time in the halogen lamp. The plane of the tungsten filament becomes uneven and breaks in a short time due to the reattachment of the tungsten filament by the halogen cycle and the evaporation of the tungsten filament by the water cycle. Therefore, it is best to use quartz glass with a low water content. In addition, the ideal manufacturing process is such that water (oxygen) does not enter even in the process of processing halogen lamps. If it gets mixed in, it can be removed by heat treatment at 800 degrees or higher, or by putting an oxygen getter in the lamp and adsorbing it.

If the quartz glass plane is heated with even a small amount of dirt attached, the dirt will permeate into the glass, causing a decrease in strength, inhibition of the halogen cycle, and devitrification phenomenon in which the transparency of the glass is lost.
Therefore, it is necessary to perform a cleaning process. .. The plane of quartz glass is melted with hydrofluoric acid to remove all dirt. Soak in 5% to 10% hydrofluoric acid for a few minutes and rinse thoroughly with pure water. Hydrofluoric acid is a very dangerous chemical to the human body, so ammonium fluoride, which is less dangerous, is often used.
To minimize the occurrence of devitrification, do not handle quartz glass with bare hands, and if it gets dirty, wipe it off with alcohol.

Quartz glass is processed by heating it to a high temperature (about 2000℃) with a gas burner or the like and pressing it against a carbon or metal rod to deform it, or by pressing it with a metal mould.
The ideal gas burner is an oxygen-hydrogen flame. Oxygen and hydrogen are mixed in advance in the gas burner, and it is blown out from the nozzle at high speed to burn it. , There is a “tip mixed type gas burner” that burns. The latter is suitable for processing quartz over a large area because the flow velocity of the flame is smaller.
The root mixing type prevents combustion from entering the nozzle by making the inside of the nozzle a high-speed flow, so basically the flame also becomes a high-speed flow. This gas burner type is suitable for heating small areas.
If the flow velocity of the nozzle is reduced with this root mixing type gas burner, combustion will enter the nozzle (flashback phenomenon), and the oxygen-hydrogen mixed gas in the gas burner will explode and burn at once, producing a loud explosion sound. If left in this state, combustion may continue in the gas mixer, which will burn the area around the mixer.
Even in quartz processing, methane gas or a mixed flame of propane gas and oxygen may be used for economic reasons. In this case, these fuel gases do not mix with oxygen as quickly as hydrogen and have a lower combustion temperature. Therefore, most of them are “root mixed gas burners”.
To heat a large area, it is a gas burner consisting of a large number of nozzle holes. And since the heating point is quite close to the nozzle and the flow velocity of the flame is fast, it tends to push the heated softened glass and deform it. When this gas burner suddenly stops the gas, the flow velocity of the nozzle decreases and it flashes back, producing an explosion sound.
To avoid this, user can either stop the oxygen slowly and then stop the fuel gas, or stop the fuel gas first and blow it out. In any case, since the flow velocity drops, flashback is likely to occur and quick shutoff operation is not possible. For quick shutoff operation, stop the combustion gas and at the same time blow air into the mixer to blow it out without reducing the flow velocity of the nozzle.
This gas burner also needs attention when igniting. It is normal to put out the fuel gas first, ignite it, and then put out oxygen, but it is not possible to ignite quickly. If fuel gas and oxygen are emitted at the same time at a pre-set flow rate, the method of igniting with a dedicated ignition burner (hydrogen flame) can handle frequent ignition.
If the glass becomes hot and softens sufficiently, it can be processed. Quartz glass may adhere to the metal during press working with a metal mould. Carbon is effective as a mould release material to prevent this. When carbon comes into contact with high-temperature quartz, it is reduced to generate COx, which strongly releases it. Oil is generally applied as a method of replenishing carbon.
When quartz is softened by intense heat, silica adheres to the surrounding area and becomes cloudy white. This is because quartz evaporates due to heating and it adheres to low temperature parts. To prevent this as much as possible, there is a method of applying a long fire of air or a gas burner to the part where silica easily adheres.
Quartz evaporation is worse in the case of reducing flames. It is thought that this is because quartz is reduced to SiO, which makes it easier to evaporate. Therefore, if the flame for processing is an excess oxygen flame, silica will not easily adhere. However, such flames have a weak thermal power for the flow velocity and have no reducing action, so there is a problem that the molybdenum foil is easily oxidized and cut in the sealing work.
The attached silica will be burned off with an oxygen excess flame or removed with hydrofluoric acid. However, it cannot be used as a lamp after sealing.
In addition, press processing should be performed in the shortest possible time. When pressed for a long time, the temperature of quartz drops sharply, leaving cracks and strong strain.
Distortion removal after quartz glass processing

When processing quartz glass, distortion occurs due to the temperature distribution during processing. Strain is a state in which compressive and tensile forces remain between the molecules inside quartz. Strain can be visually confirmed with a “strain meter” that uses polarization.
Since this residual strain reduces the strength of the quartz glass, it may burst because it cannot withstand the internal pressure while the lamp is lit, or it may cause cracks and cause initial failure of the lamp due to leakage of the enclosed gas. Also, when replacing the lamp, it may crack even though no great force is applied.
Annealing is performed to remove residual strain. Residual strain can be significantly reduced by keeping the machined part at a temperature above the slow cooling point, reheating it, and then slowly cooling it so that distortion does not occur again. Optimal retention time and cooling rate will depend on the shape of the material. Heating at a high temperature also has the advantage of burning small cracks generated by press working to make them harmless.
Even if user do not have a special strain removal furnace, user can remove strain to the extent that there is no actual harm if user work with these points in mind. However, it is difficult to completely remove it so that it cannot be confirmed with a strain meter.

Quartz glass bulbs are not a requirement for halogen lamp bulb materials. Halogen lamps that use glass that can withstand high temperatures, even if it is not as much as quartz glass (aluminosilicate glass, a type of borosilicate glass with an expansion coefficient of molybdenum), and a normal sealing method that does not use foil. Also exists. These are mass-produced varieties and are used as a means of reducing costs. However, it cannot be applied to halogen lamps with very high output, and it is not suitable for small-quantity production.

The aluminum tube in a glass pipe is heated with a halogen point heater
2016-07-24
HEAT-TECH info
Previous: 4-4.Heat treatment of tungsten
Next: 4-6.About the seal of halogen lamps